Thrift And Chance Save Maundy Money Ceremony From King's Vanity 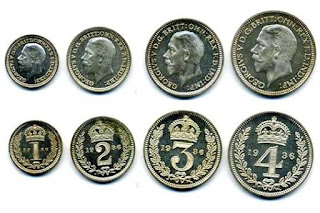 The King distributed Maundy money at Westminster Abbey. The ancient tradition of the sovereign making the distribution had lapsed in 1685 but had been revived by George V as a symbol of Royal charity in a period of extreme economic hardship. One part of ancient tradition that was maintained was that there were the same number of recipients as years in the King's age: 42 although only 34 were present, the others being too infirm. This was, of course, fewer than during his father's reign but a supplementary list ensured that no-one was deprived.

The coins that Edward VIII distributed had been minted in advance for his father. The ceremony was thus saved from the trivial but venomous dispute between the King and and the Royal Mint which wanted to apply the traditional but entirely arbitrary practice of alternating left and right profiles with each change of sovereign. Edward VIII believed that his left profile was better and insisted that it be used. No Edward VIII coins were issued although postage stamps bearing his left profile were.