Nazi Version Of The Sermon On The Mount 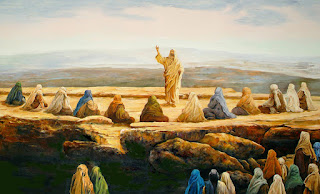 Bishop Ludwig Mueller had been appointed as Reichsbischof by the Nazi regime to bring all of Germany's protestant sects together in effect as an organ of the government. He was an enthusiastic supporter of the regime. Many sects resisted his domination and a rival "confessing" (Bekennende) Church was founded in opposition.

Mueller gave ample proof of the extent of his desire to manipulate Christianity to Nazi ends with his personal germanized version of the Sermon on the Mount.  It eliminated any reference to the Old Testament or anything that might be seen as Jewish. It praised "manly" virtues and judged behaviour on the basis of whether it was positive for the Volksgemeinshchaft, the Nazi notion of national or racial community.