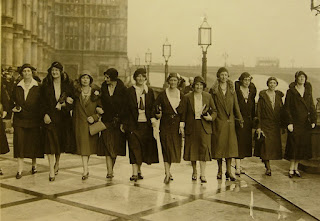 The government suffered an unexpected defeated in the House of Commons over a motion tabled by Labour's Ellen Wilkinson, one of the most prominent of the pioneer female MPs. It proposed that female civil servants doing the same work as males should receive the same pay. The motion received support from both sides of the House. Other women MPs made major contributions to the debate on both sides of the argument, including the Duchess of Atholl against the motion and Lady Astor in favour. With about 300 MPs there the sitting was quite well attended so the result could not be dismissed as a fluke product of thin attendance.

It dented government prestige, especially as Captain David Margesson, the formidable Chief Whip, had personally fought against the measure. Opposition morale benefited accordingly but there was no practical result. Baldwin refused to be bound by the vote and it was not until long after the Second World War that female civil servants won equal pay.