First Ancestor Of The Lollipop Lady 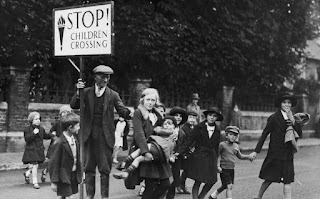 The hyper-active and publicity-hungry Minister of Transport Leslie Hore-Belisha had already ensured that his name would go down in history long after his modest contribution to politics was forgotten, with the flashing orange beacon each side of pedestrian crossings. He was presented with another opportunity to make his mark on the British road scene by a report on possible measures to reduce the appalling number of children killed on the roads, 1,245 in 1933.

Hore-Belisha wrote to local authorities permitting them to issue portable signs that adults could use to instruct motorists to stop to allow children to cross the road. The torch of learning has proved less enduring as an emblem of the presence of a school, but lollipop women and men continue to do their bit to make the roads safer.