Neglect Of Safety Alleged At Mine Disaster Inquiry 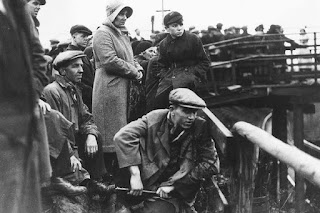 The public inquiry into the appalling accident at the Gresford Pit in North Wales of 1934 which claimed 266 lives resumed. It was one of the worst mining disasters in Britain and especially horrific with multiple explosions and long burning fires. Men attempting to rescue trapped miners were killed. The section affected was deemed too dangerous to recover the vast bulk of the dead who remain there to this day. It was commemorated in a hymn that is still played, often at miners' galas.

The left-wing Labour politicians Sir Stafford Cripps who represented the union alleged wholesale neglect of safety precautions. This set the tone for rancorous proceedings which failed to agree a clear picture of what had happened. The industry had a poor record of safety but it was a key source of exports and energy. It was in the hands of under-capitalized and inefficient owners and it had suffered badly in the Great Slump.