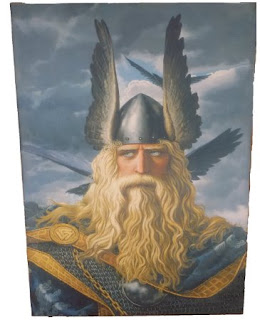 The official newspaper of the Nazi SS Das Schwarze Korps published a despairing article pleading for traditional, pre-Christian German faith to be recognised. It was triggered by the difficulties encountered by the "German Faith Movement" supposedly established to promote such beliefs which had just lost its only significant leader Count zu Reventlow, who had become increasingly disillusioned with the movement's merely anti-Christian tendencies.

Quite what this faith consisted of was left rather unclear beyond the assertion they could be found in the Eddas heroic poems. The old gods such as Wotan were dead and the sacrifice of an admittedly old white horse some years before had done more harm than good. Hitler had no desire to antagonize the established churches and the vague notions of German blood and soil that he peddled were perfectly adequate as a faith.