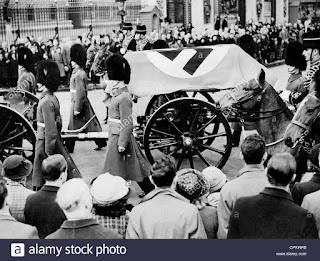 The German Ambassador to London, Leopold von Hoesch, died suddenly.  He was an old-school professional diplomat and no friend of the Nazi regime although tales that he was murdered to make way for the committed Nazi Joachim von Ribbentrop are fantasy. Juggling sane diplomacy with its Nazi variant, notably the delusion that Edward VIII might serve as a tool for an Anglo-German agreement,  had certainly strained him and might have contributed to his death.

He was widely respected in British society and his passing was deeply mourned, both personally and professionally. His coffin was honoured by an escort from the Brigade of Guards as it left London. It was draped in a Swastika as the German national flag and not in any kind of political gesture.