Undeniable Report Of Italian Use Of Poison Gas In Abyssinia 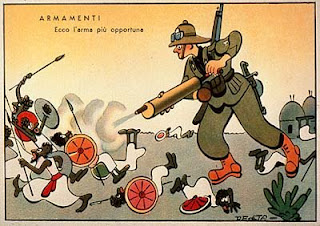 There had been persistent reports that the Italian forces invading Abyssinia had used poison gas since early in the operation. They were entirely true. Marshal Badoglio, the local Italian commander, had sought and obtained Mussolini's permission to use gas as a reprisal for the killing of a downed Italian pilot in December. The reports though had not been universally accepted. Lord Halifax, the Lord Privy Seal, had expressed the hope that they were not true in the House of Lords during a debate a few days before.

Partly in response to Halifax's speech The Times published an authoritative article from its special correspondent describing the regular use of mustard gas bombs by the Italian air force and the horrific casualties they caused. Given the newspaper's unique status, Italian guilt in the matter was now beyond argument.