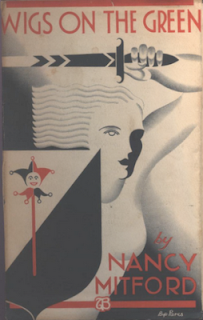 Lord Redesdale, the father of the Mitford girls, spoke in the House of Lords in favour of returning to Germany colonies taken in the First World War. He also insisted that the hand of friendship be extended to Germany and complained of the "tremendous amount of anti-Nazi propaganda", which he implied overstated the maltreatment of the Jews. He did admit that Jews did not enjoy full civil rights but claimed that they had caused "trouble of various sorts in Germany." He praised Herr Hitler for having prevented Germany from going Red. The speech appears to have aroused no particular comment. When war came he dropped his support for Germany although his wife persisted and they separated.

Two of his daughters were enthusiastic Fascists, Diana married Sir Oswald Mosley and Unity, was infatuated with Hitler. Their sister Nancy had mocked British Fascism in her early novel Wigs On The Green which had caused something of a family rift when it was published in 1934. Another sister, Jessica, was a Communist.