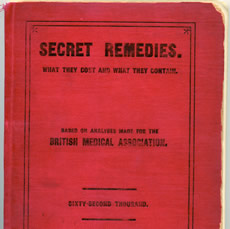 The House of Commons debated a private member's bill which sought to tighten the controls on the marketing of patent non-prescription medicines. It was an area where the government had a slightly ambiguous attitude. The vast bulk of respectable medical opinion was that the public was still being offered products of almost no value, but there were still large commercial interests supporting the manufacturers and the Treasury garnered very large sums in Stamp Duty which was payable on remedies. Over the years measures such as the Dangerous Drugs Act had imposed greater controls but it was not a priority for government.

On product in particular was mentioned: Umckoloabo, supposedly a natural cure for tuberculous from Africa which was vigorously promoted by a decorated pilot, Major Francis Stevenson. He and the British Medical Association had waged a long war against each other involving three separate actions for libel which had begun before the First World War. As so often happens with such bills insufficient MPs were present and the measure was "counted out."