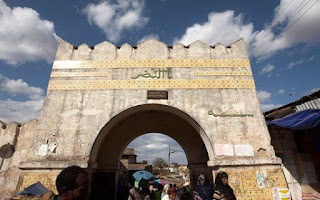 37 aircraft of the Fascist Italian air force bombed the ancient Abyssinian city Harar and left it in flames. The Coptic Christian Cathedral was destroyed. The hospital was also hit despite being clearly marked. The city was quite undefended.  Abyssinia had practically no air force of its own.

The large but primitive and ill-equipped Abyssinian armies had been almost destroyed in a series of attacks by Mussolini's modern army under the command of Marshal Badoglio. The attempts by the democratic powers to halt the invasion through the League of Nations had been completely ineffectual. The Abyssinians fought bravely sustaining vast casualties but defeat was a foregone conclusion.