Incongruous Dress And An Unintended Slight At Royal Review


The King reviewed the second battalion of the Grenadier Guards at Chelsea Barracks prior to their departure for Egypt. As the senior infantry regiment in the British army they had entertained legitimate expectations of the being the first one to be favoured with a review by the new King. It was also the regiment in which he had served in the First World War. With somewhat characteristic thoughtlessness he had deprived the Grenadiers of the honour when he reviewed the Welsh Guards two days before.

There was an incongruous aspect to the event as well. The troops wore a curious combination of sun helmets in anticipation of their service in Egypt and the grey greatcoats, more suited to the English winter. The contrast was all the more striking as the day was notably dull and smoggy so that the ceremony was barely visible to the officers' wives and other spectators. The battalion's commanding officer, Lt.-Col. Frederick "Boy" Browning was married to the novelist Daphne Du Maurier. 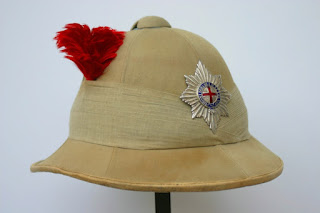