The new King made his first radio broadcast (and as it happened his only one as King) to the people of the Empire over the BBC, in those days the only direct mass media available. He had made a number of broadcasts as Prince of Wales and his father had begun the tradition of Royal broadcasts by the monarch so it was no great innovation in itself. His father's broadcasts had served as the culmination of elaborate programmes combining material from all over the Empire but he received only a simple introduction. He spoke slowly in a rather high voice, in marked contrast to his father's deep tone. The King had asked Sir John Reith, Director General of the BBC whether he should address his audience as "Ladies and Gentleman" - much as an ordinary broadcaster would have done - but Reith had firmly advised him against it. Royal reserve had to be maintained.

It was Saint David's day which may have prompted the King to make a curiously defensive remark, telling  his listeners that they might still know him better as the Prince of Wales and that he was "still that same man." With the benefit of hindsight it is tempting to detect a nostalgia for his more carefree days as Prince. Few observed in him the gravitas of a monarch and this, as much as anything, helped feed broader concerns. 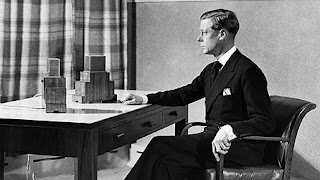