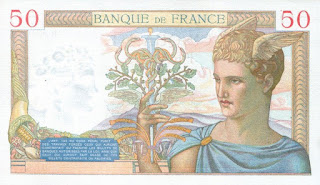 Between 1932 and 1935 the French government ran a large deficit and national debt rose from 266 milliard francs to 333 milliard. This was regarded as a national calamity but it failed to stimulate the economy because it was offset by the flight of capital abroad and simple hoarding. The government became fixated on building and maintaining large stocks of gold bullion which worsened the problem.  The government struggled to issue bonds to cover the deficit and maintaining the value of the franc became something of an obsession to give investors the illusion of security.

In 1935 the Laval government made huge cuts in government spending although it failed to achieve outright falls in consumer prices because political pressures prevented it from allowing farmers' incomes to suffer. Inevitably food price inflation hit the poorest worst. The franc came under pressure during the Rhineland crisis with the impending election adding another layer of uncertainty. An extraordinary meeting of the Governors of the Bank of France increased bank rate from 3.5% to 5% in an atmosphere of crisis. Modest spending on rearmament had partly offset attempts to cut the deficit already so there was little appetite for incurring the financial costs that a resolute diplomatic stance would have demanded.