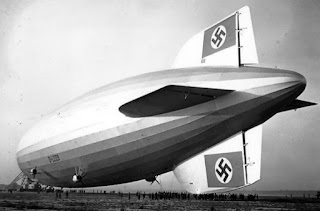 The German  Zeppelin LZ-129 airship made her inaugural passenger flight carrying dignitaries and journalists along the River Rhine for six hours. At that point she was referred to by her serial number only would soon be publicly christened as the Hindenburg in honour of the senile war lord who had given the Nazi regime a cloak of respectability in its first few months. Passengers enjoyed a comfortable, quiet flight, excellent views from large windows and a well-prepared lunch.

Passenger airships had become something of a German monopoly and the Zeppelins offered the only way for paying passengers to cross the Atlantic by air. Britain had abandoned airships in 1930 following the R-101 disaster. It seemed to be another respect in which Britain was falling behind in the air. Their vast size gave an impression of power and strength quite out of proportion to their true capacities.