It was denied in Paris that the Legislative elections due in the spring according to the usual four year cycle would be postponed or cancelled. It had been rumoured that the Rhineland crisis might have forced a change. In part the denial was a reassuring proof that normality reigned, as doubtless it was intended to. But the pending elections also gave the ruling politicians another reason to be cautious in their handling of the crisis. Public sentiment in France was every bit as anti-war as it was in Germany. The Socialist Party had officially advocated a negotiated settlement a week before and the government would have faced internal challenges to any resolute action.

The political situation in fragile was delicate. In 1934 huge riots provoked by the Stavisky affair had shaken the country. The forced resignation of Laval had weakened the government and political violence bubbled everywhere especially in extreme right wing circles. Sarraut's government had only been in office since January and any postponement of the elections would have appeared opportunistic. With 351 deputies centrist groups accounted for well over half of the 607 in the assembly, albeit split across eight separate parties. With only 179 deputies the socialists and Communists were controllable. 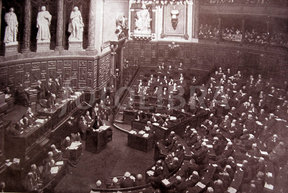