Stanley Baldwin would doubtless have been astounded to hear a conversation that supposedly took place between the King and the German ambassador, Leopold von Hoesch, on the subject of the Rhineland crisis. The only account comes from Fritz Hesse, who had arrived in London, the previous year as press counsellor to the German embassy. According to Hesse von Hoesch had received news of an impending British mobilization and had interceded with the King, an old-school professional diplomat who was an old personal friend. The King had obligingly told Baldwin that he would abdicate if war were declared and followed this up with a lurid phone call to von Hoesch to which Hesse was allowed to listen,

Can you hear me? This is David speaking. Please don’t address me with my name. Well, I saw that damned bastard. Gave him a nice brush down. Told him, I would resign in case of war. There will be no war. Don’t worry any longer. Bye, Bye! Hope to see you again……

This story still appears as evidence of the King's pro-German leanings. Apart from innate improbability - not least the underlying notion that Baldwin was inclined to war - there are many reasons to doubt the veracity of the story. At no point was mobilization contemplated. The one solid fact in the affair is that von Ribentropp, the senior Nazi who was soon to succeed von Hoesch, imagined that the King could be used to promote friendship with Nazi Germany. No one has yet satisfactorily explained the episode but the answer might lie in the fraught internal politics of the German foreign service. 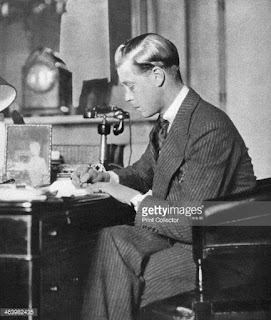