The King received a number of the delegates to the League of Nations discussions in London on the Rhineland crisis: Joachim von Ribbentrop from Germany, Paul Boncour from France and Jospeh Avenol, Secretary General of the League itself. The King had lent St. James's Palace for the talks, which were part of the increasingly futile attempts to deal with Germany's unilateral remilitarization of the Rhineland. The reluctance of France and Britain to take any kind of strong line meant that Germany only needed to bide its time and utter the odd platitude until everyone else lost interest and the fait accompli was tacitly accepted.

Ribbentrop had already been in London for the Anglo-German naval treaty the previous year. He had made great efforts to cultivate the then Prince of Wales and Mrs. Simpson, working under the delusion that Edward would try to swing British policy in favour of Nazi Germany. Hitler shared this belief. Ribbentrop passed as the Nazi expert on foreign affairs despite minimal experience and great stupidity. He had married into the large Henkell sparkling wine firm but his in-laws recognised his worthlessness and refused him a partnership. He was, though, allowed to bail out their Berlin sales agent, which he acquired. He is still referred to as a "champagne salesman" but in reality he only dealt in its humbler German cousin, Sekt. 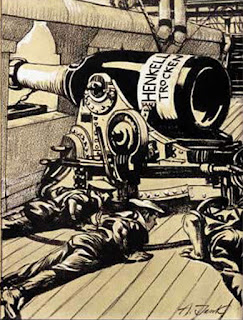