Censure Debate Has Government On Back Foot

A Labour motion of censure for the government's Special Areas policy was heavily and inevitably defeated given the government majority, but the opposition had the best the of the debate. Hugh Dalton, MP for Bishop Auckland, one of the hardest hit constituencies, led for the motion and could make the telling point that the Special Areas held only 7% of the population but 20% of the unemployed. Red tape was a major handicap to achieving anything.

Bravely rather than wisely, the government put Ramsay MacDonald up to oppose the motion and he faced sustained heckling from his one-time Labour party colleagues. His speech was not hugely convincing with its emphasis on plans yet to be realised and measures that had brought "hope" (but no more). He had to admit that appeals to business to migrate jobs to the areas had failed. Perhaps most worrying for the government a number of their own MPs spoke in favour of the motion, notably Lord Wolmer, who accused it of having "come to the end of their ideas." It was telling rebuke for a government hidebound by conservatism and manifestly short of imagination. 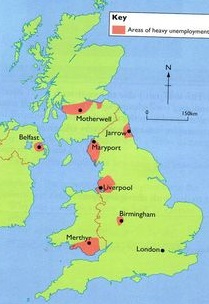