With considerable publicity the RAF presented the Fairey Battle light bomber, one of its latest aircraft, to the public only a week after its maiden flight. This was in marked contrast to the absence of publicity surrounding the Supermarine Spitfire fighter, whose maiden flight had been a few weeks before. In the growing debate over the pace of rearmament to counter the growing threat of the Nazi Luftwaffe it was inevitable that the RAF should wish to showcase the progress it was making. Bombing was also closer to the heart of the service's leadership as its war-winning offensive role. Fighters still had a unseemly and defensive image.

Both Battle and Spitfire embodied the key advances in technology that made for a quantum leap in aircraft design: monoplane, retractable undercarriage, enclosed cockpits and metal construction. Both used the Rolls-Royce Merlin engine. The Battle was presented as a huge success for RAF innovativeness and daring. It was supposedly faster than any potential enemy fighters but in reality it proved an utter failure. When war came it was completely unfitted for combat, suffered massive losses in the battle of France in 1940 and saw no further combat service with the RAF. 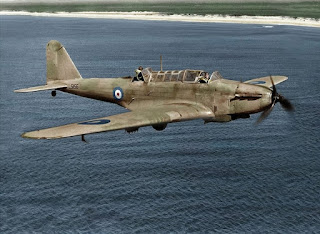