Queen Mary Sets Sail On A Sea Of Smugness 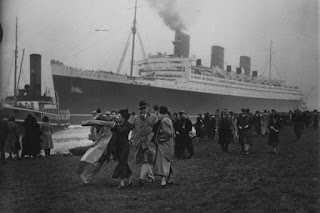 
The pride of the British passenger shipping fleet the new Cunarder Queen Mary, which the King had inspected a few weeks before, took to the sea for the first time. It was a tricky passage from the fitting out dock at the John Brown yard in Glasgow to the open water. The vast vessel had to navigate the narrow turns through the mudbanks of the River Clyde in front of thousands of spectators.

To the relief of all the journey passed smoothly. The British newspapers noted with more than a touch of smugness that she sailed close by the burned out hulk of the huge French liner, L'Atlantique, which had been towed to the Clyde to be broken up following a catastrophic fire three years before.