Authoritarianism Edges Out Fascism In Austria 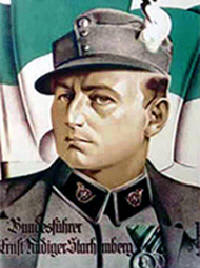 Outright Fascism suffered a temporary eclipse in Austria when the Chancellor Schuschnigg completely eliminated Prince Ernst Stahremberg the leader of the para-military and pro-German Heimwehr from the government. They had had shared power uneasily since the murder of Chancellor Dollfuss in a bungled Nazi coup in 1934. The dissolution of the Heimwehr was announced and it was absorbed into the Fatherland Front led by Schuschnigg. As a sop to Fascist supporters two ministers who were publicly hostile to the movement were also removed.

Schuschnigg was every bit as authoritarian as Stahremberg but he was more closely affiliated to clericalist circles. He was also in favour of alliance with Italy rather than Germany. As Italy and Germany drew closer, the days of an independent Austria were numbered and neither man had much political future. Schuschnigg was imprisoned after the Anschluss in 1938 and Stahremberg went into exile.