End Of An Empire In Abyssinia 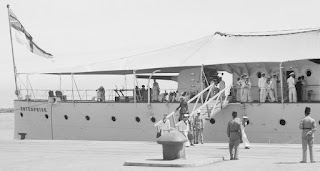 The Italian invasion on Abyssinia reached its conclusion when Emperor Haile Selassie fled the capital Addis Ababa with his family to take refuge in the French colony of Djibouti, the first of the 1936 crop of ex-sovereigns. Faced with the overwhelming military superiority of the Italian army it had only been a matter of time until the Abyssinians were completely defeated on the field of battle. The half-hearted attempts by Britain and France to save Abyssinia had failed. They were left to discuss what was to be done with Haile Selassie. A Royal Navy cruiser H.M.S Entreprise took him away to Palestine to begin what was to be five years of exile. This left  Edward VIII as the only reigning Emperor on earth.

Before he left the city he had thrown the Royal palace open for his people to help themselves to his possessions. This helped trigger widespread rioting and the city's 1,000 British residents sought refuge in the grounds of the Legation four miles from the centre.