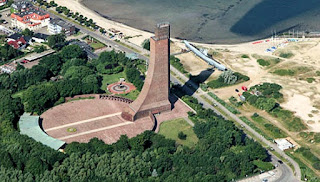 The Nazi regime picked the twentieth anniversary of the Battle of Jutland (the Battle of the Skaggerak in German) for one of its rare commemorations of a battle of the Great War. The battle had been indecisive with both sides claiming victory but the Royal Navy had suffered far higher casualties than the High Seas Fleet. One of the very junior Royal Navy officers was the King's second son, Prince Albert later King George VI, the only British sovereign to have seen combat since William IV in the eighteenth century. Hitler attended the inauguration of a memorial near the great naval base of Kiel to the German Imperial navy's 30,000 dead during the the war. It was an imposing structure 72 meters high which still stands to day, rededicated to all sailors who perished in conflict.

Any claim that the event was merely one of commemoration was deeply compromised by a mock sea battle involving three of the Kriegsmarine's new class of warship, the pocket battleship, which shelled a radio-controlled target ship, the Zaehringen, with live ammunition. Hitler himself viewed the fun from aboard one of the pocket-battleships, the Deutschland, before transferring to the yacht Grille. Hitler disliked sailing intensely, but he was prepared to make a sacrifice to make his point.