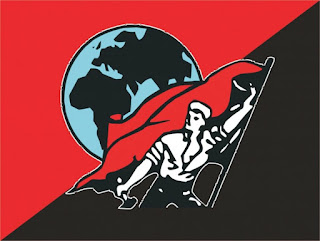 Spain was the country with the strongest anarcho-syndicalist movement of Europe in 1936. Anarcho-Syndicalism strove to put power into the hands of workers through direct action and not through a structured political movement. It aspired to the abolition of wages and capitalism. It was no more popular with traditional Communists, obedient to Moscow, or to the conservative, property-owning classes.

At their congress held in Barcelona's vast bull-ring they contemplated alliance with the traditional U.G.T. union aligned with the Socialist Party. Catalonia was the heartland of anarcho-syndicalism and this contributed to region's peculiar combination of extreme politics and separatism. With 2m members the U.G.T. was far stronger but the Anarcho-Syndicalists wanted it to abandon any form of tolerance for capitalism. It was one of the myriad fractures that was soon to destroy Spanish society.