Public Given Chance To Judge The Royal Air Force 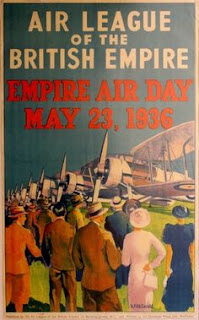 As part of a propaganda effort to persuade the British public that the Royal Air Force was not being left behind in the race towards rearmament in which Germany was claiming a lead for the Luftwaffe, Empire Air Day had been instituted in 1934. RAF stations across the country were open to the public and squadrons mounted flying displays. To the expert eye it was clear that the RAF still had a great deal to do in terms of modernizing its equipment. Almost all the aircraft in service were biplanes with fixed undercarriages and open cockpits, the same fundamental design features of the machines that the Royal Flying corps had been using twenty years before in the First World War. Modern monoplanes with enclosed cockpits and retracting undercarriages, notably the Hurricane and the Spitfire, were on their way but it would be two or three years before they became the standard equipment. Some technological advances could, though, be showcased and at one aerodrome visitors could pay sixpence to give pilots in the air instructions to perform aerobatics by radio. As the Battle of Britain demonstrated four years later, the ability to control airborne units from the ground and direct them to attack enemy formations was a crucial force multiplier.

The 1936 attracted large crowds although the weather was poor. The fragility of the older generation machines and their vulnerability to poor flying conditions was painfully demonstrated by two fatal accidents on the day. In one of them an aircraft flew into the power lines supplying Dover, cutting them and blacking the town out for the afternoon.