The Rabbit: Friend Of The Dictators 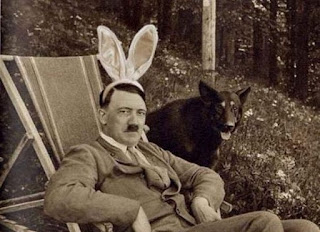 A meeting of all manner of poeple discussed the grave problem of the rabbit under the chairmanship of Sir Rowland Sperling, former ambassador to Finland and a landowner in Hampshire. Apart from representatives of the Univeristy of London Animal Welfare Society those present could be counted as hostile to the rabbit although the representatives of the Natural History Museum might, just, have been classed as neutral. Their attitude was as mysterious as their presence.

Sir Rowland denounced the rabbit as a drag on agriculture in peacetime and a "gratuitous addition to the country's burdens in time of War." No one objected to the call to exterminate the rabbit although, predictably, there was no agreement as to the correct method. Sir Rowland decried the National Farmers' Union call for an import quota on foreign rabbits, which was to push up the price and incentivize folk to hunt them. Instead he wanted a draconian scheme of state regulation for rabbit farming.