Dawn Of The Shadow Factory 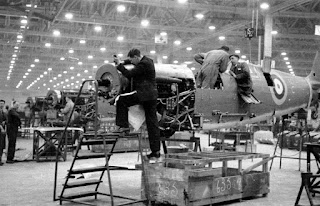 The last day of the Parliamentary session before the recess gave MPs an opportunity to make their views felt on the things they felt that mattered, unconstrained by any formal structure of debate or the the need for a vote of any kind. The topic that featured most heavily was rearmament, more specifically criticism of the government's performance on the score. Yet again Sir Thomas Inskip found himself earning his recently awarded place in the Cabinet dearly.

Even a government supporter, Sir Edward Grigg, professed shock at Inskip's admission that "even" machine tools were in short supply. In reality this was a facet of the immense task of economic organization that proper rearmament in depth required. It is open to question how many MPs understood the significance of Inskip's announcements that two major car-makers had agreed to build airframes and that they and five of their competitors were planning the production of aero-engines together. This was the beginning of the "shadow factory" scheme which was to translate into a far more efficient aircraft industry than Germany's when war came. But effective long-term preparation is rarely rewarded in politics and in 1940 Lord Beaverbrook was able to create the legend that he had single-handedly built a functioning industry as Minister of Aircraft Production.