Landslide For Left Wing In France 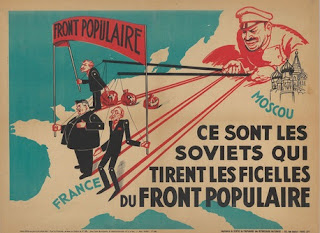 The left wing Front Populaire had a landslide win in the second round of the French national elections. They took almost  two-thirds of the seats in the lower house with the bulk of the gains falling to the parties furthest on the left, the Socialists and the Communist Party. The way was clear for them to form a government under Leon Blum, the country's first socialist administration.

From the start the  Front Populaire government faced savage opposition despite the strength of its mandate. Blum was France's first Jewish Prime Minister and the wounds of the Dreyfus affair forty years before had not healed. Anti-Semitism was still a powerful force. The Communists accounted for less than a quarter of the Front's deputies but this did not prevent the new government as being portrayed as a tool of Moscow.