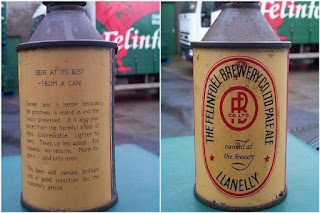 The giant English packaging company, Metal Box Ltd., proudly displayed to journalists visiting its factory at Acton the company's new breakthrough product, the beer can. Beer cans, the management proudly explained, weighed less and took up less space than bottles and, of course, saved the book-keeping cost of tracking returns and the relevant deposits. Metal Box might not have got this far but for the cooperation of a small  brewery in Wales, which had given it direct proof that the beer-can was a commercially viable proposition.

The Felinfoel Brewery of Llanelli is the oldest brewery in Wales and was controlled by a family with interests in the tin-plate industry of the region which was still stricken by the Great Slump. This created the motivation to overcome the innate conservatism of beer-drinkers and pub-owners and to take the brave decision to start selling beer in cans the previous December. It paid off for Felinfoel which still brews today under the ownership of the sixth generation of the John family.