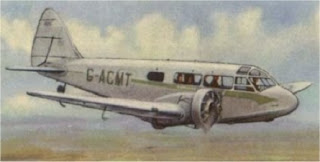 In the genteel guise of a garden party at the works of Fairey Aviation at Heath Row the members of the Royal Aeronautical Society showed off their peaceable wares. Perhaps they felt that people needed to be reminded of the fact that they did not only make warplanes.

The star of the show was the Airspeed Envoy small airliner. It was a monoplane with retracting under-carriage and thus well in advance in the better established de Havilland Dragon Rapide with which it competed. Airspeed, though, was a far less robust company founded by Nevil Shute, later better known as a novelist. He later featured the dubious practices surrounding company flotations in Ruined City. His autobiography Slide Rule is possibly the only frank account ever of wholesale accounting manipulation by a company boss who practiced it himself. He could justify hefty valuations applied to the aircraft in Airspeed's inventory with the sad fact that they would soon find ready buyers at high prices amongst the opposing sides in Spain's looming civil war.