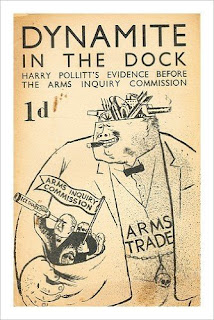 A pointed little exchange in the House of Commons shines a light on an aspect of politics and public opinion between the wars which encouraged appeasement. Commercial manufacture of weapons was widely regarded as an evil and as a force that actively promoted conflict. This is the premise of Graham Greene's popular novel A Gun for Sale. Weapons makers were suspected of having contributed to the outbreak and duration of World War One in their own interests. They were reviled for the economic power at home and their use of corruption abroad. Vicker's sinister salesman, Sir Basil Zaharoff, provided an unforgettable images of a "merchant of death." There was a broad spectrum of political opinion that was hostile to the weapons trade but it was concentrated on the left wing. The Communist Party cynically played up the combination of  instinctive anti-capitalism and visceral pacifism to its own ends. The political opponents of Fascism thus opposed rearmament which would have given credibility to a diplomatic challenge.

A Royal Commission into the arms trade had been established in 1935 to inquire whether private sector weapons manufacture should be allowed  and was still sitting in 1936. The Cabinet Secretary Sir Maurice Hankey had given contentious evidence defending the practice of selling weapons in unstable regions and to potential enemies. It seemed as though a leading bureaucrat was making the weapons makers case for them and the Labour Leaders forced the Prime Minister to admit that Hankey was speaking for government departments.