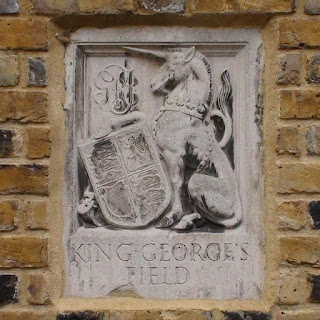 The plans for the commemoration of the late George V preferred by his sons over the kind of grandiose scheme advanced by the Archbishop of Canterbury took a step forward. Funds from George V's Jubilee Trust were to be used to buy 600 acres of land across the country to be used a public playing fields. It was estimated that 25,000 young people would be able to make use of them.

£550,000 was raised by public subscription and local authorities contributed funding. The network was administered by the National Playing Fields Association to avoid duplication of effort and for the sake of efficiency. Ultimately a total of 471 schemes covering 4,300 acres were approved including a handful in British Imperial territories. They were to be called simply "King George's Fields" and to carry the King's heraldic symbol. They exist today, fulfilling their original goal.