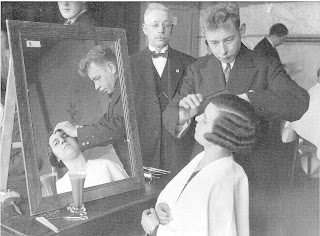 The Government had introduced a bill to regulate the opening of shops on Sundays, in practice to restrict it as far as possible. Traditional sabbatarianism was marching hand-in-hand with concern for shop workers. Predictably the bill faced an avalanche of attempts to introduce exemptions or to close loopholes. These included  an amendment to allow sea-side fish and shops to open and one to remove an exemption in favour of bakers' confeectionery products.

The question of whether hair-dressers should be allowed to accomodate people staying at private clubs as well as hotels tipped the debate into new levels of frantic attention to detail. The spectre was raised that the measure might extend itself to the more extensive (and mysterious) world of women's hairdressing. The notion that special clubs might be be formed to exploit the loop-hole - rather on the pattern of private drinking clubs - was found to be unconvincing but one brave MP persisted in warning that the residents of large blocks of flats might do so.