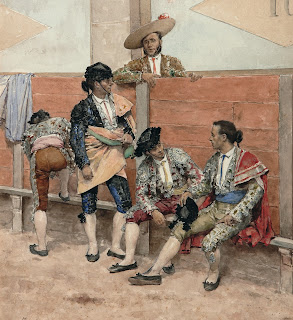 The citizens of Madrid, especially those who had the time and money for leisure activities, must have felt that every man's hand was lifted against them. A series of strikes had paralyzed crucial sectors to the repose of madrilenos. Cafe waiters had downed trays, golf course greensmen had downed their mowers just as the grass began to grow vigorously, which had caused a horrifying surge in the numbers of balls lost on course.

Worst of all bullfighters withdrew their labour in protest at the incursion of doubtless inferior Mexican fighters onto the homeland of the sport. A handful of fighters had jumped the gun and struck earlier than had been planned which led to the cancellation of a major corrida even as spectators arrived at the arena. Medical examination revealed that the delinquents were fully fit to fight and they were arrested.