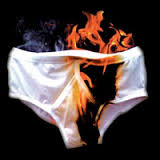 Two ILP MPs were suspended for calling the Home Secretary a liar in breach  of Parliamentary rules. It was unsure exactly what he was supposed to have lied about, but what counted was the unparliamentary insult. A third ILP MP made the same accusation, and was annoyed to be treated merely as an irritation. he was obliged to repeat it several times until he, too, was suspended. The newish Labour leader, Clem Attlee, could be observed attempting to restrain his MPs from joining in. Eventually the opposition benches contented themselves with singing the Red Flag. The opposition Liberals backed away from their earlier pledge to vote against the measures and voted with the government.