The Search For Reform Of The Means Test 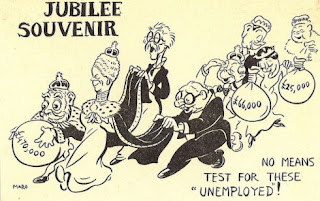 One of the most bitter legacies of the Great Slump  had been the introduction of means-tested benefits for the unemployed. In practice the successor to the Poor Laws of earlier centuries, their distribution was controlled by a national Unemployment Assistance Board (UAB), albeit with with considerable local discretion in calculating them. The resulting near-chaos had led to a Standstill being brought in 1935, freezing the level of payments.

The appointment of Ernest Brown as Minister of Labour in 1935 gave fresh impetus to moves to end the impasse. Brown was a Liberal MP, but came from a working-class background. He had served both in the ranks and as an officer during the in First World War, and had been decorated for gallantry in both capacities; he had the rare distinction of being awarded the Military Medal and the Military Cross. The new regulations proposed for the UAB would have increased total expenditure by a modest net 2% in existing cases with another 200,000 unemployed becoming eligible. The call to increase the weekly rate for a married couple by 8% across the board from 24/- (£1.20) to 26/- (£1.30) was, however, turned down. The change certainly alleviating conditions for the unemployed somewhat, but in practice the decline in unemployment as was approached played a far greater role.