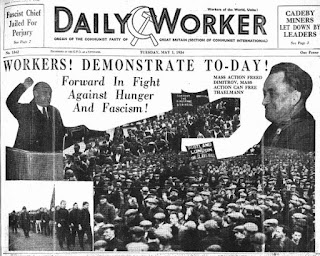 It was a comparatively easy job to keep the British Labour Party to a broadly centrist course in the 1930s. The far left in British politics was dominated by the Communist Party of Great Britain (CPGB)  which took its  orders from Moscow. The Independent Labour Party was fading rapidly into insignificance. The crucial issue was the relationship between Labour and the CPGB.

In contrast to France, where the Socialists were in a de facto albeit uneasy alliance with the Communist Party, the Labour Party had set its face against any form of collaboration with the CPGB, which it recognized would become merely a platform for communist domination. In response to CPGB proposals for a "united front" against Fascism and war, the National Council of Labour issued a pamphlet entitled The British Labour Movement and Communism: An Exposure of Communist Manoeuvres. The pamphlet was uncompromising in its denunciation of communist efforts over the previous twenty years to subvert the Labour Movement and to the anti-democratic revolutionary programme of the Communist International.