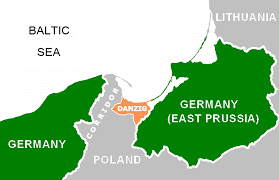 Under the guise of new "security measures" the Nazi government of the supposedly Free City of Danzig passed a slew of measures bringing its powers in line with that of Germany itself. It made use of the "Enabling Law" passed after the Reichstag fire in 1933. The new laws spelled the end for any form of opposition and also began direct oppression of the Jews by banning the slaughter of animals according to their rite.

These were the first fruits of the recent exchange at the League of Nations in Geneva, where Poland had backed away from protecting non-German minorities in Danzig. They had accepted the transparently specious claim by the head of the Danzig government, Greiser, that he had nothing far-reaching in mind. The Polish government had acceded to "minor constitutional changes". This is what they got.