Sombre Commemoration Of The Battle Of Verdun 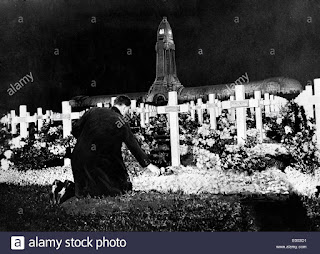 Tens of thousands of veterans gathered on the battlefield of Verdun to commemorate the defining bloodbath of the First World War for the French nation twenty years before. The centre-piece of the event was the procession of a symbolic torch, lit at the the Arc de Triomphe in Paris, to the vast ossuary at Douaumont, which holds the bones of tens of thousands of unidentified dead. The torch was used to light a lamp at the top of the steps leading to the memorial.

The veterans dropped a flower on the grave nearest to him and recited  "For the peace of the world". One disabled veteran pronounced an oath, repeated by all present, "Because those who rest here and elsewhere have gone to the peace of the dead only to establish the peace of the living and because it would be sacrilege for us to allow what the dead abhor, we swear to safeguard and to will the peace which we owe to their sacrifices." A night vigil followed.