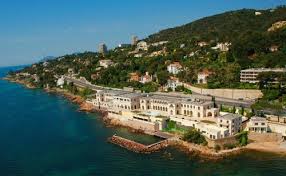 Buckingham Palace announced that the King had abandoned his planned holiday in the South of France at short notice. He had been due to leave at the end of the week and to spend the month of August at the vast, modernist and luxurious Chateau de l'Horizon rented from American socialite and former actress, Maxime Elliot. The outbreak of the civil war in Spain was given as the risen, even though the nearest point on the Spanish border was about 500km away. In reality, the British Foreign Office was concerned at the disturbances provoked in France under the Front Populaire.

This blow fell hard on the French tourist industry, which was already reeling from the news that Stanley Baldwin would not be taking his traditional holiday at Aix-Les-Bains and would holiday in England instead. The question was debated in the Chamber, where the true reason for the King's decision was clear. Disquiet was appeased by the grant of easy credit to small businesses such as hotels.