King Happy with Churchill as Speech-Writer but not his Advice on Mrs. Simpson 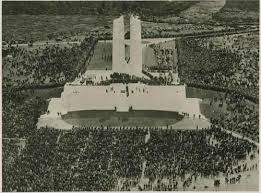 The King inaugurated the memorial to the 60,000 Canadian dead of the First World War. It is sited at Vimy Ridge, where the Canadian Army had fought hard and, by the standards of the Western Front, successfully  in 1917. He thanked France for the gift of the land on which the monument is built and affirmed that it would forever be part of Canada.

Winston Churchill, who had known the King since 1911 when, as Home Secretary, he had arranged his inauguration as Prince of Wales, had written much of the speech. He had also advised the King on the topic of Mrs. Simpson, arguing against her divorce and the idea of inviting her to Balmoral. Neither piece of advice was congenial to the King, and he practically cut off communication with Churchill until the crisis was in full swing.