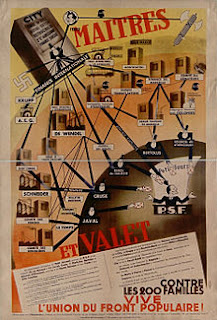 Leon Blum's Front Populaire government in France published the bill nationalizing the entire national arms industry. It was a drastic measure, which outlawed the manufacture of weapons by anyone other than the state. It combined idealism with anti-capitalism; the private sector arms makers, notably those linked to the steel sector, had long been a bugbear of the left.

Nationalization had the unintended consequence of disrupting the aircraft industry at exactly the wrong moment. France's plane makers were, admittedly, ill-organized and fragmented, but at the best of times, it would have taken some while to wring efficiencies from a single, state-owned industry, even supposing this was practical. As it was the French air force was much slower than Germany or Britain to reequip itself with modern machines, embodying the crucial developments of monoplane and monocoque construction, retracting undercarriages and enclosed cockpits. The French air force found itself at a major disadvantage.