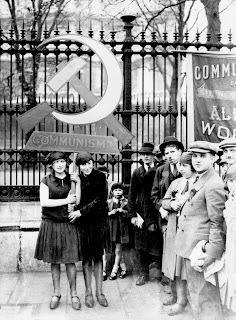 The House of Commons was treated to a vigorous, purely once-off debate on the policing of demonstrations. Under the guise of proposing a reduction of £100 in the vote for the Metropolitan Police, a Labour MP accused the government of a lack of even-handedness in how legal powers were used. The upsurge in violence created by British Union of Fascist marches and rallies had triggered moves to extend the range of legal tools available. Whilst Fascists were the proximate cause, there was a strong, and not wholly fantastical, suspicion that Communist and other left wing demonstrations were the true object.

Criticism focused on the legal basis or lack of it for the "Trenchard ban" under which protests near to Labour Exchanges had been forbidden. Opposition MPs were rather inclined to an excess of balance in their sentiments. The former Labour leader, George Lansbury, merely appealed of equal administration of the law and the barrister, comic-writer and divorce law reformer, A. P. Herbert, with greater wit than venom that, as far as he was concerned in the battle between Black shirts and Red shirts, "a plague on both your blouses". Routine stone-walling from the Home Secretary, Sir John Simon was the best the government came up with, but its inbuilt majority secured a heavy defeat for the motion.