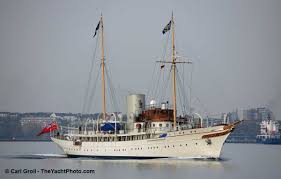 The King rapidly made new arrangements to replace the aborted plan for his holiday at the Chateau de l'Horizon on the Cote d'Azur. He would charter Lady Yule's modern and luxurious yacht, the Nahlin, for a cruise on the Dalmatian coast and the eastern Mediterranean, comfortably remote from civil war in Spain and civil unrest in France. In keeping with tradition two Royal Navy destroyers would escort the Nahlin and the King would be in constant touch with Britain.

It would be a private holiday, conducted under the formal incognito of Duke of Lancaster, so the names of the other guests would not feature in the Court Circular. British journalists instantly guessed that these would include Mrs. Simpson, but their employers still kept total silence on the question. They were similarly discreet about one hasty refit of the Nahlin to meet the needs of her new passengers: the entire library was removed to make way for drinks.