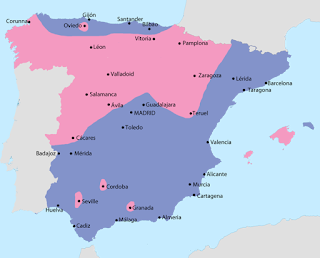 Political violence had been gathering pace in Spain. In response to the murder of a Socialist member of the Guardia de Asalto riot police, a prominent monarchist parliamentarian Calvo Sotelo was arrested by the Guardia de Asalto and summarily killed. In turn a number of army generals decided to mount a coup to displace the government.in agreement with the monarchist and anti-Republican Carlists under Manuel fal Conde.

The coup was carried out ruthlessly, but in mainland Spain was only very partially successful. Many troops remained loyal to the government and the only major city of which the coup's supporters took control was Seville. It was a different story in Spanish Morocco, the main part of the colonial empire, where the 30,000 strong operational elite of the professional army was stationed. Officers there loyal to the government including a senior general were killed and the colonial army provided the backbone of the rebel forces in the ensuing civil war.