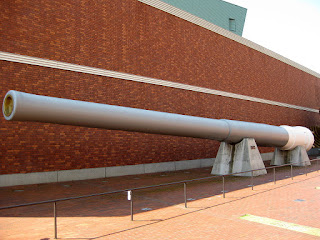 The London Naval Treaty, signed earlier in the year as supposedly another great step in arms control, was proving to be an embarrassing dead letter. Its formal rejection by Japan had deprived it of any value anyway, and the specific considerations thrown up by that rejection served, if anything, to flag up a new arms race, albeit one that proved to well behind the reality of military technology.

The US Navy was probably the most directly concerned by Japanese naval development and took the opportunity to revisit the crucial question of the calibre of battleship armament. The lead time required for the design and production of large calibre guns was actually greater than for the ships that mounted them. The Treaty had fixed a conditional limit of 14 inches, but the US Navy was having second thoughts and now wanted to mount 16 inch guns on its new battleships to match what it thought the Imperial Japanese Navy was doing. The Japanese went on to produce guns of 18 inch calibre, the largest ever on warships, but it was carrier-borne aircraft, which proved to be the decisive weapon in the Pacific during World War Two. Gun actions were few and far between.