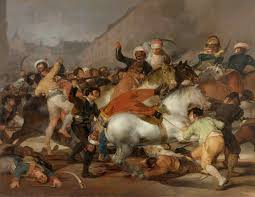 The military situation in Spain was deeply confused, but there was no doubt that a full-blown civil war was in progress. The President of the Republic likened the insurgent forces to Napoleon's troops, who had provoked a near-universal uprising of the Spanish people in 1808 famous as the dos de mayo, which produced a highly effective guerrilla resistance to the invaders. It was a defining moment in modern Spanish nationhood.