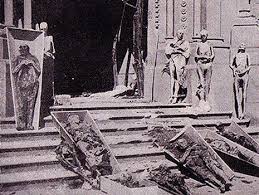 The Spanish Civil War was rich in atrocities committed by both sides. On balance the rebels were rather more guilty than the Republicans; the professional colonial army imported from North Africa had a particularly ugly reputation. It was widely recognized that the army had already blackened its name by its behaviour in the Asturias disturbances  in 1934, when it had conducted a full scale military campaign against the striking miners as though they were a foreign invader, but there was little understanding of how thoroughly the same policy was pursued even more rigorously after the attempted army coup.

The Republicans lost the propaganda war on this score and it is clear from early foreign coverage of the war that they had the harder task. Naked class hatred, notably in Catalonia, made it all too easy for the international press to taint the entire Republican movement as a Communist-inspired movement dedicated to the extermination of the established order. Atrocities against priests and nuns featured prominently in propaganda, aimed at exploiting fear of atheistic Communism. Images of the corpses of long dead priests and nuns, exhumed and desecrated, were also potent weapons.