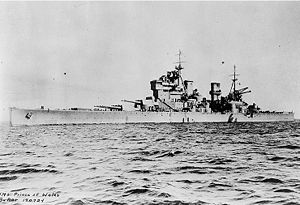 Sir Samuel Hoare, the First Lord of the Admiralty, announced in Parliament the order for the first two of the Royal Navy's new generation of battleships, the King George V class. They were to be built by Vickers-Armstrong and Cammell Laird. Their design was compromised by British adherence to treaty limitation on main armament to 14" guns, which led to the use of two unsatisfactory four gun turrets.

Despite these problems, King George V went on to give good service and played major parts in the sinking of Bismark in 1941 and Scharnhorst in 1943.Her first sister had a less happy record. She was to have been named King Edward VIII but she was renamed Prince of Wales before she was even laid down, as it was not felt appropriate to honour the, by-then, Duke of Windsor. She failed to score any hits damage on either Bismark or Prinz Eugen in the Battle of the Denmark Strait, in which Hood was sunk. Along with Repulse, Prince of Wales was sunk by Japanese aircraft in 1941 in one of the defining disasters of the early phase of Britain's Pacific war.